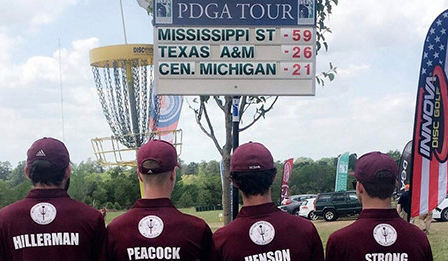 “This is something this club has been working toward for a long time,” said team captain and club president Steven Hillerman. “We had a pretty good team last year and came in fifth place, so we were really hoping to do more this year. For us to come away with the title really means a lot.”

The Bulldogs shot 59 under par over the six-round tournament, putting them comfortably ahead of second place team Texas A&M, which finished at 26 under par for the tournament. The four-person group of Mississippians that won the title include, by hometown:

In addition to the four players on MSU’s primary squad, two other teams of four from MSU competed in the competition.

The MSU Disc Golf Club practices on the university’s two public disc golf courses, which are managed by the Department of University Recreation.

MSU’s Sports Clubs program allows students the opportunity to engage in activities of their choice at various skill levels, contributes to the development of student leadership, and encourages healthy lifestyles. For more, see http://urec.msstate.edu/programs-and-activities/sportsclubs/index.php.